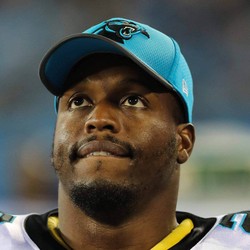 The Giants have placed RB Jonathan Stewart on IR with a foot injury.

The veteran Stewart has been a non-factor. There was some thought over the summer that he could play a role behind Saquon Barkley, but what few touches have been left have gone to Wayne Gallman.

Stewart seems to have all but lost his grip on the number two running back spot to Wayne Gallman, and Friday night did not do anything to help his cause. In the event that Saquon Barkley were to miss time with an injury, Stewart and Gallman would likely split time, but it seems at this point that Gallman would get the heavier side of any split.

Mike Maher1 year ago
Jonathan Stewart not lock for No. 2 RB

Jonathan Stewart isn't a lock to be the Giants' second RB behind Saquon Barkley.

The veteran Stewart has been outplayed by Wayne Gallman this preseason, and he could move into more of a mentor role for the young RBs rather than playing an active role on the field. As such, Gallman should be considered the lottery ticket or handcuff for Barkley entering the season given his superior preseason play and higher ceiling.

Giants running back Jonathan Stewart has had a quiet start to the preseason after the team drafted Saquon Barkley with the second overall pick to be their running back of the future and the present. Stewart rushed four times against the Lions on Friday for -1 yards.

While Stewart's fantasy stock plummeted once the Giants selected Barkley with the second overall pick, he is now in danger of losing his handcuff status to 2017 fourth-round pick Wayne Gallman. Gallman has flashed in the preseason while Stewart has floundered, and while it is still very early, fantasy owners looking to handcuff Barkley in 2018 will have to decide between Stewart's pedigree or Gallman's upside.

Running back Jonathan Stewart is expected to sign with the New York Giants, according to ESPN's Adam Schefter on Twitter.

Stewart is reuniting with his former general manager and former offensive coordinator in New York, as Dave Gettleman and Mike Shula both have been hired to the same posts there. With this move, the Giants address an obvious need after poor performances from their running backs in 2017, but they are bringing in a 31-year-old Stewart who averaged a career-worst 3.4 yards-per-carry last season.

Deposit $10 at a DFS partner site you have NOT played at and get a FREE 6 Month HOF Subscription!
Claim Offer
Most Accurate Experts
for Jonathan Stewart
Consensus Rankings
View all Flex Rankings