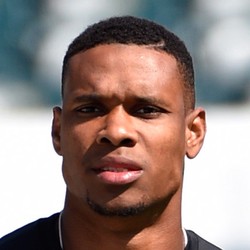 Eagles wide receiver Jordan Matthews caught three of his six targets for 27 yards in Sunday's loss to the Seattle Seahawks.

Matthews has seen plenty of opportunities since rejoining the Eagles due to injuries to Alshon Jeffery and Nelson Agholor, but production has not yet followed.

Eagles wide receiver Jordan Matthews caught one of his six targets for six yards in Sunday's loss to the New England Patriots.

Matthews signed back with the Eagles during the bye week with DeSean Jackson being placed on injured reserve, and he played a lot on Sunday with Alshon Jeffery also sidelined. Unfortunately, he was only able to catch one of his six targets.

The Philadelphia Eagles will be reuniting with free agent wide receiver Jordan Matthews.

With DeSean Jackson on injured reserve, Jordan Matthews is headed back to the Philadelphia Eagles. Matthews will be nothing more than the third or fourth option, but could play his way into a bigger role if he proves to have anything left in the tank. Once a productive player, Matthews arguably has more to offer than what Nelson Agholor, Mack Collins, and JJ Arecega-Whiteside have provided this season. Matthews is worth a speculative add in ocean deep leagues. He should be added to watch lists in shallower formats.

Free agent receiver Jordan Matthews is currently visiting the Eagles for a physical.

The Eagles have been struggling at the wideout position and just lost DeSean Jackson for the season. The fact that Matthews is taking a physical suggest a contract could be close to being finalized.

49ers wide receiver Jordan Matthews is inactive for the team's Week 5 matchup against the Cleveland Browns on Monday Night Football.

Matthews only re-signed with the 49ers earlier this week after the team placed fellow wideout Jalen Hurd on injured reserve, so his inactive status should be not surprising. He is probably at least one more injury away from being relevant in most fantasy formats.

Deposit $10 at a DFS partner site you have NOT played at and get a FREE 6 Month HOF Subscription!
Claim Offer
Who Should I Start?
Most Accurate Experts
for Jordan Matthews
Consensus Rankings
View all Flex Rankings