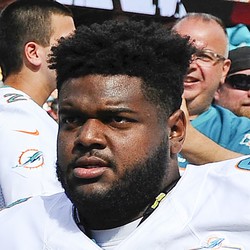 Jordan Phillips had himself quite a day, recording three tackles, three sacks, three TFLs, and three QB hits in a 14-7 win over the Titans.

Phillips feasted on the Titans OL in this low scoring affair, and his play prevented Marcus Mariota and the Titans offense from heating up. The Bills defense will have another opportunity to rack up the sacks against Miami next week.

Phillips was a second-round pick of the team in 2015. He had an issue on the sidelines this weekend, and the team had decided they have had enough. Despite being a high draft pick, Phillips hasn't produced much in the NFL.

Blaine Blontz1 year ago
Jordan Phillips signs with the Dolphins

The Miami Dolphins have signed DT Jordan Phillips to a four-year contract. The rookie from Oklahoma was the 52nd pick overall in the 2015 draft.

In college, Phillips was labeled as a player who took plays off. He joins a veteran group that includes Cameron Wake and Ndamukong Suh who hopefully can teach the young Jedi the ways of the Force, help him improve his on-field motor. If they are successful, Miami's line can quickly become one of the most dominant in the league.

The Miami Dolphins were set to enter the second round with the 47th overall pick. However, a trade with the Eagles allowed them to move down five slots to the 52nd slot where they selected Oklahoma DT Jordan Phillips.

I respect the fact that Ndamukong Suh will need a space-eating counterpart to take the attention off of him, offensive lines won't be able single him out. Todd McShay mentioned on air that Phillips can do a back flip standing still, at 6'5, 330 lbs. That is impressive. He will need to work on his motor and playing at a lower pad level, but with such a competitive D-line, expectations will be high. The Dolphins' defense will easily be top ten next season, and could flirt with top five in the NFL.