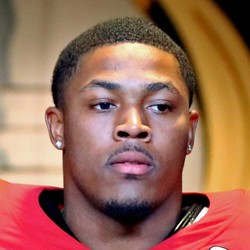 Raiders general manager Mike Mayock told ESPN that he expects running back Josh Jacobs to be more involved in the passing game in his second season.

One of the limiting factors for Jacobs in 2019 was the fact that he came off the field a lot for third downs and in passing situations. If that changes, he could vault into elite RB1 territory. He could still be limited by the offense in general, but as a true workhorse he would likely see the volume needed to be an elite fantasy running back. He's currently the RB11 in our early expert consensus rankings.

Josh Jacobs (shoulder/illness) has been downgraded to out for Sunday's game against the Broncos.

Jacobs was doubtful heading into the season finale and now has been officially ruled out. He will finish his rookie campaign with 242 carries for 1,150 yards to go along with 20 catches for 166 receiving yards and seven total touchdowns. Jacobs should be fully recovered from his shoulder injury during the off-season. With Jacobs ruled out, look for Dwayne Washington and Jalen Richard to lead the Raiders backfield Week 17.

Josh Jacobs is not expected to play in Week 17's must-win match-up against the Denver Broncos Sunday.

Jacobs underwent a surgery on Wednesday to clear up a skin infection he had which was said to not have a negative impact on his status for Week 17. Unfortunately, it seems like something has changed between then and now. Even if he does find a way to put on the pads for Sunday, he will probably not be as effective as he usually has been this year. DeAndre Washington is expected to see a larger increase in reps for this week.

Josh Jacobs (shoulder) was able to participate in Tuesday's walkthrough.

Coach Jon Gruden says there is a chance Jacobs suits up in Week 17. Oakland is technically still alive in the playoff race but would need a lot to go their way for it to happen.

The Raiders running back Josh Jacobs has a "chance" to play Week 17 against the Broncos, according to head coach Jon Gruden.

Jacobs has missed a few games to end the season due to his shoulder injury. Given the team has nothing to play for, it doesn't make a ton of sense to play the rookie, who has already shown that he is very capable of leading a rushing attack, but the Raiders could still have Jacobs suit up for the finale. He'd be a risky play given his injury and the uncertainty around his playing time entering the game.

Blaine Blontz28 weeks ago
Who Should I Draft?
Most Accurate Experts
for Running Backs
Do Not Sell
Are you looking to contact Customer Support about a subscription or account related question?
Yes
No, I'm a California resident looking for the California Consumer Privacy Act form