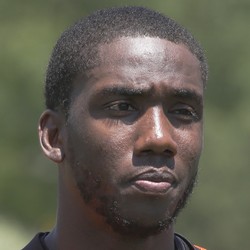 Josh Johnson completed nine of 15 pass attempts for 157 yards and a TD, adding four rushes for 17 yards and a rushing TD in the Lions’ loss to the Browns in Thursday’s preseason finale.

The dual-threat QB turned it on in the second half, leading the Lions within striking distance of the Browns before ultimately falling short. After an NFL comeback with the Redskins last season, he has a real possibility of landing a backup job with Detroit.

Josh Johnson completed nine of 18 passes for 85 yards, no TDs, and a pick, adding three carries for four yards in the Lions' 30-23 loss to the Texans on Friday.

Less than a week after signing with the Lions, Johnson made his debut. He averaged a putrid 4.7 yards per attempt and threw a pick in the loss. Johnson will compete with Tom Savage and David Fales for a backup job behind Matthew Stafford.

Free-agent quarterback Josh Johnson has agreed to a deal with the Detroit Lions, according to reports.

While Matthew Stafford is the starter in Detroit, Johnson is expected to step in and be able to compete for the backup job immediately.

Mike Maher34 weeks ago
Josh Johnson works out for the Ravens

Free-agent quarterback Josh Johnson worked out for the Baltimore Ravens, according to a report from NFL insider Ian Rapoport.

The Ravens have a short-term need at backup quarterback after the injury to Robert Griffin, and Johnson played fairly well for Washington last season. Baltimore has Lamar Jackson as their starter and appears to want to be able to have mobile quarterbacks backing him up.

Washington quarterback Josh Johnson completed 12 of his 27 passes for 91 yards and an interception in the team's Week 17 loss to the Philadelphia Eagles.

Johnson and the Redskins were completely shut down by the Philadelphia offense on Sunday, as they were held to just 89 total yards. Johnson finishes the season with 590 yards passing, three passing touchdowns, and four interceptions to go with 120 rushing yards and one rushing touchdown while playing in four games.