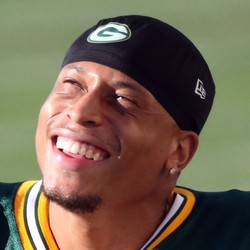 While Jones didn't quite reach a career-high in tackles, he reached a season-high with ease against the Jets. Jones and the Packers finish their season next week against the Detroit Lions.

Jones has been impressive ever since the Packers came off their bye week, going for at least five tackles in six of their eight games since. Next up for Jones is a trip to New York to face the Jets before returning home to close the season against the Lions.

Jones has been extremely consistent since Week 9, securing at least five tackles in five of his last six outings. Jones will look to keep things going against the Bears in Week 15.

Josh Jones recorded five total tackles (all solo) and a sack in the Packers' loss to the Arizona Cardinals.

Jones locked up his first sack of the season during the third quarter with a big stop on third and five in Green Bay territory. Next up for Jones is a home game against the Atlanta Falcons.

It took several changes in the secondary, but Jones has finally got his shot. The second year safety has made the most of it too, going for 18 tackles in his last three outings.