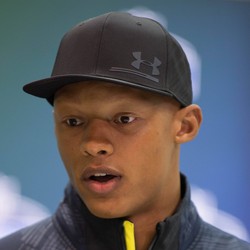 The Jaguars have traded a 2020 fifth-round pick for Steelers’ QB Joshua Dobbs.

With Nick Foles (clavicle) likely headed to IR, Gardner Minshew was the only healthy QB on the Jags’ roster. The trade for Dobbs provides needed depth at the position, and it’s highly likely Minshew remains the starter and Dobbs the backup while Foles is out.

Pittsburgh Steelers quarterback Joshua Dobbs completed 6-of-11 passes for 95 yards in a 17-7 win over the Chiefs in Saturday's preseason action. Dobbs threw one interception and rushed once for five yards in the win.

Dobbs took over for Mason Rudolph late in the second quarter and played all of the third quarter. The two are competing to be the primary backup to starter Ben Roethlisberger when the season begins.

Pittsburgh Steelers quarterback Joshua Dobbs completed 5-of-8 passes for 85 yards in a 30-28 win over the Buccaneers in his team's preseason opener on Friday.

With starter Ben Roethlisberger sitting out, Dobbs got the start and led two drives before giving way to Mason Rudolph. The two are vying to be the backup quarterback for the Steelers.

The Pittsburgh Steelers have selected former Tennessee quarterback Joshua Dobbs with the 135th overall pick in the 2017 NFL Draft.

With Ben Roethlisberger, 35, contemplating retirement in recent offseasons, it was time for Pittsburgh to begin planning for the future. They did that Saturday when they selected Dobbs 135th overall. The former Tennesse signal caller has a legitimate chance to beat out Landry Jones as Roethlisberger's primary backup, and because of the starter's injury history, the impending rookie could see the field in 2017. Still, barring a long-term injury to Big Ben, Dobbs won't have any fantasy value this season.