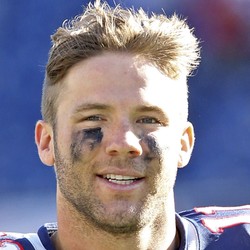 Julian Edelman underwent a shoulder procedure last week that is expected to involve "not a length rehab".

Edelman was clearly banged up towards the end of the season but he is expected to be ready for New England's normal off-season program. However, it remains to be seen who he will be catching passes from in 2020.

Julian Edelman rushed twice for 12 yards and a touchdown and caught three of his five targets for 30 yards in the Patriots' Wild Card loss to the Titans.

Edelman was fine on relatively light usage in this game, but had a big drop late in the game that would have given the Patriots a key first down. Edelman is clearly not 100% and should be back stronger next season in terms of health, but if Brady does not return, his value could take a big hit for fantasy purposes. Edelman is signed for two more season with the Patriots.

Julian Edelman (shoulder, knee) says he is "feeling better" than he has in recent weeks.

Edelman finished the season with some quiet performances while playing limited snaps. He's fully expected to play on Saturday night against the Titans, however. One would figure he should be a near every-down player again with the Patriots' season on the line.

Julian Edelman caught three of his seven targets for 26 yards in the Patriots' Week 17 loss to the Dolphins.

Edelman is clearly not at 100% health, but has generally been able to overcome. This contest was a down game for him in all regards, but Edelman remains the clear favorite of Tom Brady and will be heavily used next week against the Titans as long as he's active. Fire him up with confidence for any fantasy playoffs contests.

Julian Edelman (knee/shoulder) is listed as active for Sunday's game against the Dolphins.

With the Patriots having a bye on the line, Edelman will play through the shoulder injury. He will play in his usual role as Tom Brady's top target. Edelman is WR1 against a Miami pass defense that has been obliterated through the air all season.

Deposit $10 at a DFS partner site you have NOT played at and get a FREE 6 Month HOF Subscription!
Claim Offer
Most Accurate Experts
for Julian Edelman
Consensus Rankings
View all Flex Rankings