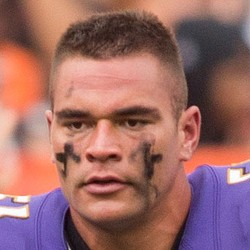 Kamalei Correa is signing a one-year, $3 million deal with the Titans.

Correa totaled 37 tackles and a career-high five sacks across 16 games for the Titans last season. He will continue his usual outside linebacker role and should be involved in the rotation during passing situations. Correa is worth a flyer in deep-league IDP formats.

Brad Camara9 weeks ago
Kamalei Correa stands out against KC

Kamalei Correa tallied six solo tackles, four assisted tackles, one TFL, one sack, and one QB hit, as the Titans' Super Bowl bid came to an end on Sunday with a 35-24 loss to the Chiefs.

Correa was the lone Titans defender with a respectable stat box against Kansas City, whose offense once again came back from an early deficit to torch the opposition. Despite finishing on the losing side, he had what was easily his best game of the year, recording his first career double-digit tackle performance. He will be a UFA heading into the 2020 season, so he'll have to hope that his AFC Championship game was convincing enough for a team to offer him a contract.

Kamalei Correa logged six solo tackles, two TFLs, one sack, one QB hit, one pass defended, and a fumble recovery in a 31-17 win over the Colts.

While Correa had a productive afternoon, he hasn't been more than a role player for the Titans up to this point. He can remain on your waiver wire when the Titans play the Raiders next week.

This was another solid performance for the former second round pick. Correa could be forcing his way into the pass rushing rotation with Brian Orakpo, Harold Landy and Derrick Morgan.

Baltimore Ravens linebacker Kamalei Correa stuffed the box score with a dominating performance during the Hall of Fame game Thursday.

Correa finished with five solo tackles, three sacks and a pick. The third-year linebacker showed up in a big way as questions began to swirl around his place on the team. The performance is a huge building block for Correa moving forward.