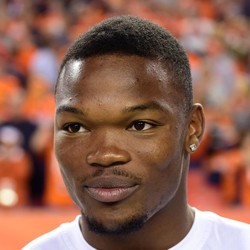 Kapri Bibbs got his first playing time since being picked up by the Packers and posted a two-yard carry to go along with three receptions for 13 yards on five targets in Week 17.

Bibbs got a brief look for the Packers late in the game in the blowout loss to end the season. He will likely not have fantasy value next season depending on his landing spot.

Washington running back Kapri Bibbs rushed three times for 17 yards and caught three passes for 19 yards in Thursday's loss to the Dallas Cowboys.

Bibbs has not been able to carve out a larger role with pass-catching running back Chris Thompson out of the lineup, but he was able to score his third rushing touchdown of the season on Thursday.

Washington running back Kapri Bibbs rushed once for no yards and caught two passes for six yards in Sunday's loss to the Houston Texans.

Despite the absence of fellow pass-catching running back Chris Thompson, Bibbs has not been able to carve out a role in the Washington offense. The team leans on Adrian Peterson in the running game and does not target Bibbs often in the passing game.

Bibbs once again did not capitalize on the absence of pass-catching running back Chris Thompson, as the Redskins went with a conservative game plan that featured Adrian Peterson and short passes from quarterback Alex Smith.

Washington running back Kapri Bibbs rushed three times for 30 yards and a touchdown and caught one pass for 15 yards in Sunday's loss to the Falcons.

Bibbs had an increased role on Sunday with fellow running back Chris Thompson missing the game with a rib injury, and he managed to find the end zone despite only receiving four touches. With Washington leaning on Adrian Peterson in the running game and Thompson expected back soon as the pass-catching running back, Bibbs has limited fantasy value.