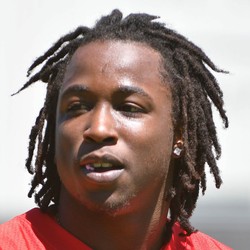 Restricted free agent Kareem Hunt has been given a second-round tender by Cleveland, and will likely remain a Brown in 2020.

There’s a high probability that Hunt will remain with Cleveland given the second-round tender that was placed on him. They will get a free second round pick if somebody else should sign him, which could potentially happen, but it’s likely he comes back to Cleveland on a relatively cheap deal. Look for Hunt and fellow RB Nick Chubb to remain a very solid 1-2 punch for the Browns out of the backfield in 2020. Chubb is an RB1 while Hunt, with his pass-catching ability, is more than likely an RB2. Hunt could be the most valuable fantasy RB handcuff in the NFL this year.

Browns running back Kareem Hunt won't be charged with marijuana possession stemming from a January incident, according to police.

There were recent rumors that the Browns were planning to tender Hunt, and this makes sense that it would be the case assuming no further chargers or pending suspensions. However, it's still to be determined which round tender the team offers which will impact how likely Hunt is to remain with the team or be signed elsewhere. Hunt has shown that he can produce fantasy value on the Browns even in a shared role with Nick Chubb, but his value could increase this offseason if he heads to another team in a larger role.

Browns general manager Andrew Berry told reporters that the team will tender an offer to running back Kareem Hunt. Berry did not indicate which tender the team will use on Hunt.

The tender used will determine what draft pick compensation a team would need to offer the Browns to sign Hunt away from Cleveland. It will be interesting to see what tender the team uses, as it should be indicative of what role they have in mind for Hunt. While Hunt proved fantasy-relevant in Cleveland, his best opportunity for fantasy success is likely to head to another team where he can take on a larger, if not starting, role.

Kareem Hunt told reporters that he expects to remain with the Browns in 2020.

Given his likely cost to retain him, the Browns may not ultimately be his landing spot, especially with Nick Chubb already in town. Still, Cleveland could issue a first-round tender that would pay Hunt over $4 million in 2020. They could also sign him to a long-term contract, or they could retain him on the tender and trade him prior to the start of the season. While Hunt showed that he can have some fantasy value in Cleveland with Chubb, he would have an opportunity to return to RB1 status if he lands in the right situation this offseason. However, he's also recently admitted that he'd likely fail a drug test, so another suspension is not outside the range of possible outcomes.

Cleveland Browns running back Kareem Hunt carried the ball three times for four yards and added three catches for 32 yards in a 33-23 loss to the Bengals in Week 17.

Hunt finishes the 2019 season with 37 receptions in eight games. He heads into the offseason as a restricted free agent, meaning the Browns can bring him back if they so desire.

Deposit $10 at a DFS partner site you have NOT played at and get a FREE 6 Month HOF Subscription!
Claim Offer
Who Should I Start?
Most Accurate Experts
for Kareem Hunt
Consensus Rankings
View All Rankings