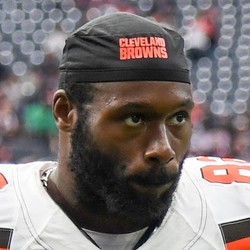 Williams went undrafted out of Washington before spending two seasons with the Seahawks, where he caught just one pass. He joined Cleveland in 2017 and caught nine balls for 84 yards in seven games. Indy's receiving corps is thin, but Williams will be hard-pressed to make the squad as their fifth or sixth receiver.

Kasen Williams led the Browns with four catches for 41 yards in the Week 6 loss to the Texans. He was second on the team with 6 targets.

Williams was still the WR3 in this game by snap count, playing 58% of the offensive snaps, which trailed Ricardo Louis and Rashard Higgins. However, Williams was targeted six times and was efficient on those targets. At this point, now Browns WR can be trusted for fantasy, but Williams is a name to know, especially for dynasty players, as he showcased very well in the preseason with Seattle and seems to be resurfacing with Cleveland given the injuries to the WR group. If Williams continues to play well, it's not impossible that he lines up alongside Corey Coleman next year, and perhaps Ricardo Louis for the rest of 2017.

"More opportunities are definitely coming," Williams confidently said. Picked up off waivers from the Seahawks after a great preseason, Williams should have had a long catch in Week 1 but just failed to stay in bounds. He's already pushing snaps with Ricardo Luis and with the struggles from Kenny Britt, there may be an opportunity for Williams to make a name for himself.

The only Browns receiver to have secured a role safely in this offense is Corey Coleman. Kenny Britt has been unimpressive and Ricardo Luis hasn't shown much either. Kasen Williams is a name to monitor on a team lacking receiving weapons. Williams can be added in the deepest of fantasy leagues as of now.

Williams has to be asking himself what else he has to do to start a year on an NFL roster. In orbit with the Seahawks as a practice squad player since 2015, Williams erupted for a 9-208-1 preseason line, turning in multiple highlight-reel grabs. Something of a local hero (Williams attended high school in the Seattle area, and played for the University of Washington) who was ticketed for a high draft slot before encountering injuries in college, Williams looked to be returning to form. He looks to be a candidate to be claimed by another team, and if not he is almost certain to be signed to the Seahawks practice squad. Entering his Age 25 season, there is a case for rostering Williams in deep dynasty formats.

Kasen Williams caught two passes on four targets for 28 yards and a touchdown in Seattle's 20-13 win over the Vikings.

With Tyler Lockett and Paul Richardson both nursing injuries, Williams played with the first offense and continued his impressive preseason. He caught a 1-yard touchdown on a fade pass on Seattle's opening drive, then followed it up with an open-field tackle on the ensuing kickoff that forced the Vikings to start at their own 12. He nearly scored again from 45 yards out, though he dropped the pass while falling backward into the end zone. Williams will continue his quest for regular season playing time Friday when the Seahawks host Kansas City.