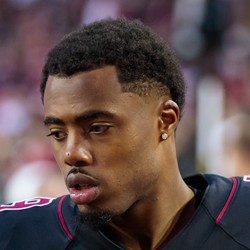 KeeSean Johnson hauled in 2-of-3 targets for 22 yards and a score in the Cardinals' Week 9 loss to the 49ers.

It was his first career touchdown. Johnson is only worth rostering in dynasty leagues right now.

Arizona Cardinals rookie KeeSean Johnson has been ruled inactive for Week 8 against the New Orleans Saints.

KeeSean being inactive in somewhat of a surprise, but luckily for Cardinals fans Christian Kirk is due back after a three week layoff. Johnson being inactive means Damiere Byrd and Trent Sherfield will be manning the outside when Arizona goes four wide.

KeeSean Johnson caught 2-of-5 targets for 14 yards as the Cardinals beat the Falcons 34-33 in Week 6.

Johnson has yet to total more than 46 receiving yards in a game this season. He's merely a dynasty stash for fantasy purposes.

Johnson also rushed once for a gain of three. It was a disappointing performance since he got a bit more opportunity today (with Christian Kirk sidelined). Johnson is probably nothing more than a dynasty stash right now.

Despite Damiere Byrd being sidelined, KeeSean Johnson corralled two of just three targets for 19 yards in the Cardinals Week 4 loss to the Seattle Seahawks. There had been some hope Byrd’s absence would lead to a breakout game for the rookie receiver. Instead, Trent Sherfield acted as Bryd’s direct replacement and saw 84 percent of the snaps to Johnson’s 57 percent. Johnson still appears to be a worthwhile stash in deeper leagues, but is entrenched in what looks like a low volume role as the team's number four receiver. Those who were holding out hope in shallower redraft leagues should start to consider other options.