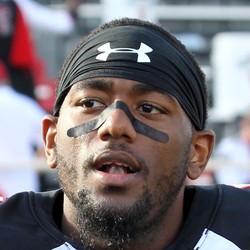 Keke Coutee caught one pass on three targets for seven yards on Sunday as the Texans lost to the Titans by a 35-14 score in Week 17 action.

Coutee had a disappointing season in 2019 catching just 22 passes over nine games for the Texans. Coutee will have be too far down the depth chart to be fantasy relevant in the playoffs.

Keke Coutee (coach’s decision) is inactive for Saturday’s matchup against the Buccaneers.

With Will Fuller officially active, Coutee will be inactive for the second consecutive game. The Texans will roll with DeAndre Hopkins, Kenny Stills, Fuller and DeAndre Carter as their wideouts for Week 16.

Keke Coutee (coach's decision) is inactive for Sunday's game against the Titans.

With Will Fuller active, the Texans decided to use DeAndre Carter over Coutee for Sunday's Week 15 matchup against the Titans. Coutee had five catches for 68 yards on eight targets in Week 14's loss to the Broncos. Despite the solid stat line, he had a costly fumble that was returned for a touchdown. Coutee will be inactive and is a dynasty hold only at this point of the season.

Keke Coutee caught five of eight targets for 68 yards and lost a fumble in Sunday's 38-24 loss to the Broncos.

With Will Fuller out, Coutee was able to step in and see a season-high in targets. The 22-year-old receiver could see a similar workload in Week 15 if Fuller is out again and is worth grabbing in deeper fantasy formats.

Keke Coutee will play in Week 14.

Keke Coutee is a lock to play. Any fantasy team looking to utilize Coutee for their match up can safely utilize him.