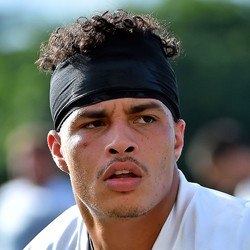 Kenny Stills made three catches for 80 yards and a touchdown on six targets Sunday in the Texans’ Divisional Round loss to the Chiefs by a 51-31 score.

Stills was questionable going into the game on Sunday with a knee injury but was able to play. The veteran receiver caught 40 passes in his first season with the Texans and should be third on the depth chart with the team going into 2020 if he remains with the team.

Kenny Stills is listed as questionable to play against the Chiefs due to a knee injury.

Kenny Stills caught 4-of-5 targets for 46 yards in the Texans' Wild Card win over the Bills by a 22-19 score on Saturday.

Stills looked to be the biggest benefactor on Saturday with Will Fuller not able to play. The veteran receiver didn't have the impact expected. It looks like Fuller will be back for the Divisional Round which means Stills will move down the depth chart and will have a hard time seeing targets for the Texans.

Stills, along with fellow receiver Will Fuller, will watch Houston's Week 17 game from the sidelines. DeAndre Hopkins (illness) is active, but is expected to see a reduced volume of action. The Texans' receiving corps will be fairly limited in a largely meaningless Week 17 game against the Titans.

Stills moved up to the #2 receiver for the Texans when Will Fuller went down for an injury. Stills could continue in that role in Week 17 if Fuller misses the contest and could be worth adding in deeper fantasy leagues.

Deposit $10 at a DFS partner site you have NOT played at and get a FREE 6 Month HOF Subscription!
Claim Offer
Most Accurate Experts
for Kenny Stills
Consensus Rankings
View All Rankings