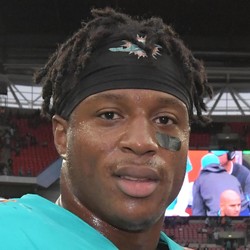 Drake is on the transition tag in 2020 that will pay him roughly $8.4M this season. In a league where the shelf-life of running backs is minimal, it would behoove Drake to take Keim up on his offer of a long-term contract, given the numbers work for both sides. Because he is on a one-year transition tag, the Cardinals have until July 15 to complete a deal for Drake. Contact terms and money aside, Drake is in for a nice uptick in value this season with the offense getting a huge boost from the addition of all-pro WR DeAndre Hopkins. Consider him a fringe RB1 heading into the season.

Adam Koffler7 weeks ago
Kenyan Drake: Cardinals 'would like to have' three running backs

Cardinals coach Kliff Kingsbury said he would like to have three running backs to use during the regular season.

This shouldn't deter fantasy players from getting excited about Kenyan Drake this season. After all NFL coaches like to have depth at every position. Drake, who was acquired from Miami mid-season, finished the 2019 campaign on a heater. It culminated in a four-TD performance in Week 15 against the Browns. Following the trade of David Johnson this off-season, Drake is set up for more fantasy success in 2020.

Drake was transition tagged by the Cardinals earlier in the week, and now he officially signed the tender offer. The details of the offer are unclear at this time, but he will be back with Arizona in 2020. Drake logged 123 carries for 643 yards and eight touchdowns across eight games for the Cardinals last season. Arizona dealt running back David Johnson this offseason, giving Drake the starting running back duties all to himself. The 26-year-old is a borderline RB1 going into 2020 fantasy drafts.

The Cardinals are placing the transition tag on Kenyan Drake, per Ian Rapoport of the NFL Network.

The transition tag allows the Cardinals to match any offer sheet. Unless another team offers Drake an offer the Cardinals refuse to match, it’s a good bet Arizona will retain Drake. The 26-year-old logged 123 carries for 643 yards and eight touchdowns across eight games for the Cardinals in 2019. Drake is currently 18th among all running backs in the expert consensus rankings.

Chris Burke notes that the Lions could pursue free-agent running back Kenyan Drake since they showed interest in him during the 2019 season before he was traded to the Cardinals.

Drake came on late last season to be a league-winner for some after his trade to the Cardinals. It's unclear where he'll be suiting up in 2020, as well as what role he'll carry. If he were to land in Detroit, that would seem to limit his value as well as that of Kerryon Johnson. Currently, Drake is the RB18 in our early expert consensus rankings.

Deposit $10 at a DFS partner site you have NOT played at and get a FREE 6 Month HOF Subscription!
Claim Offer
Who Should I Draft?
Most Accurate Experts
for Kenyan Drake
Consensus Rankings
View All Rankings
Do Not Sell
Are you looking to contact Customer Support about a subscription or account related question?
Yes
No, I'm a California resident looking for the California Consumer Privacy Act form