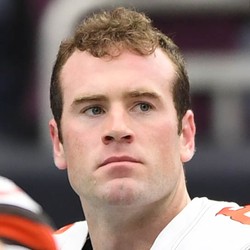 Kevin Hogan is being released by the Denver Broncos, as reported by Ian Rapoport of NFL Network. The journeyman backup has bounced around the league and never gotten any significant opportunity.

This isn't notable other than it probably opens the door for rookie Drew Lock. The Broncos indicated they're shopping around for another #2 QB, but Lock figures to be the future starter at least until/unless he proves unworthy. Lock should be owned in Superflex Dynasty leagues but has little appeal for 2019. Hogan has no appeal in any format.

The Denver Broncos have claimed quarterback Kevin Hogan off of waivers from the Washington Redskins. In a corresponding move, Denver is releasing 2016 first-round bust Paxton Lynch.

Hogan played two seasons for the Browns but was hampered by a terrible roster while displaying a decent arm and some scrambling ability. He's likely behind Chad Kelly as Denver's backup, so Hogan is well off the fantasy radar.

Kevin Hogan completed 20 of 37 pass attempts for 140 yards, one touchdown, and three interceptions in the Browns' Week 6 loss to the Texans. He added five carries for 36 yards.

Hogan came into this game with a bit of speculation that he could flash some upside, but he struggled against a Texans defense that should have been a plus matchup. Hogan is firmly off the fantasy radar after this performance, and the continued struggles of the Browns QBs limit the fantasy value of the receiving options. With Hogan under center, the target leaders were Ricardo Louis, Kasen Williams, and David Njoku, but none were able to produce much of value.

Head coach Hue Jackson has named Kevin Hogan the starter at QB for the Browns in Week 6.

This is good news for the Browns offense from a fantasy perspective, as Hogan has been more efficient than the woeful rookie DeShone Kizer, who has struggled through 5 games, being benched twice. Hogan seems to target rookie TE David Njoku more than Kizer did, which is exactly what we want for fantasy. The offense also appears to be getting WR Ricardo Louis more involved. In a good matchup against a depleted Texans defense, Hogan is actually a viable streamer this week, and will be owned in a lot of GPP lineups for DFS players most likely. Hogan's presence also upgrades Njoku and Louis, who are both decent options if you are looking for bye week fillers. Hogan is also just that for now.

Kevin Hogan came in to relieve rookie DeShone Kizer in the second quarter of the Week 4 loss to the Jets. Hogan complete 16 of his 19 pass attempts for 194 yards, two touchdowns, and one interception. He added four carries for 30 yards, including a long of 11 yards.

Hogan played much better than Kizer, who continues to struggle early in his rookie year. Head coach Hue Jackson did not name a starter for Week 6 against the Texans, but Hogan has been playing better of the two. Hogan is not a viable fantasy option except in deep 2QB leagues if he starts. Hogan, however, did seem to be looking the way of David Njoku, which could be a bump to Njoku's value.