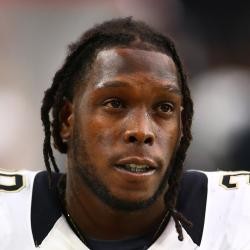 The New York Jets have released running back Khiry Robinson.

Robinson only appeared in one game last season with the Jets for which he received eight carries for 22 yards. His durability is in question moving forward as he has broken his leg three times since 2015. He could linger on the open market for a while this offseason before getting another shot with a new club.

The New York Jets have activated RB Khiry Robinson (leg) from the PUP list on Monday.

Robinson will make his New York Jets debut on the practice field as he was activated from the PUP list on Monday. The veteran rusher missed all of the team;s training camp sessions up to this point recovering from a broken leg that he suffered during the 2015 season as a member of the New Orleans Saints. Robinson is expected to be New York's short yardage/ goalline back in 2016 but has minimal fantasy value entering the campaign.

The New York Jets have placed RB Khiry Robinson (leg) on the PUP list on Wednesday.

Khiry Robinson will begin training camp on the PUP list as he recovers from a leg injury suffered in Week 8 of the 2015 regular season while playing with the Saints. Robinson is rumored to be New York's short-yardage/goalline back in 2016, a role he assumed during his tenure with New Orleans. He is currently projected to be New York's No. 3 running back behind Matt Forte and Bilal Powell in 2016 and has minimal fantasy value entering the upcoming campaign.

ESPN's Rich Cimini expects New York Jets RB Khiry Robinson (leg) to begin training camp on the PUP list. Robinson sat out the entire offseason recovering from a broken leg suffered during the 2015 season with the Saints. Robinson should be "good to go in the preseason."

Khiry Robinson is entering his first season on the New York Jets in 2016 and is expected to assume the role of the "short-yardage and goal line back" per reports. In eight games with the Saints last season, Robinson tallied 180 yards and a career-high four touchdowns. The Jets employ a crowded backfield with Matt Forte and Bilal Powell ahead of Robinson on the depth chart, so he should remain on the fantasy waiver wire to begin the 2016 campaign.

The New Orleans Saints are "not expected" to make a contract offer to impending free agent Khiry Robinson, allowing him to reach the open market according to ESPN's Mike Triplett.

Khiry Robinson is likely to hit the running back flooded free-agent market. Robinson rushed for 180 yards and four touchdowns in eight games prior to being placed on IR due to a leg injury.