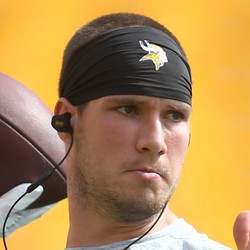 Kyle Sloter completed 16 of 24 pass attempts for 163 yards, one TD, and one INT in the Vikings’ loss to the Bills in Thursday’s preseason finale.

Sloter put up a solid performance in Week 3 of the preseason and is making a strong case to open the season as Kirk Cousins' primary backup.

Kyle Sloter completed 11 of 13 passes for 116 yards and a TD, adding two carries for six yards in the Vikings' preseason win over the Seahawks on Sunday.

Sloter was nearly perfect with his completions, and he finished the game with a solid 129.5 QB rating. He's competing for a backup job behind Kirk Cousins in a QB room that is very top-heavy.

Sloter did his darndest to make the club and has opened a fair share of eyes this preseason. The rookie from Northern Colorado finished the preseason with averaging a mighty impressive 9.6 yards per attempt and throwing zero interceptions to three touchdowns. Instead of keeping Sloter on the active roster, the Broncos instead decided to bring the uninspiring at best, awful at worst Brock Osweiler back into the fold to back up Trevor Siemian. Should he clear waivers, the Broncos would be wise to bring him back to the practice squad, as he possesses NFL size and arm strength plus a brief but intriguing track record. Sloter isn't a name to remember right away in fantasy, but for those playing in 2QB or Superflex formats, file it away for two to three years from now.

Rookie QB Kyle Sloter of the Denver Broncos finished Sunday's contest against the Arizona Cardinals 15-of-23 for 220 yards passing with one touchdown. He added one rush for one yard while playing the entire game for Denver.

Sloter will start the season on the roster due to back-up QB Paxton Lynch's shoulder injury. Sloter will not be a factor in fantasy leagues this season barring injuries to Denver's other QBs.