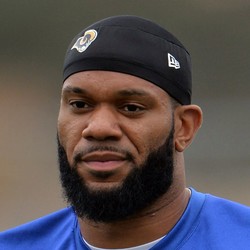 Lance Kendricks had two receptions for 37 yards on three targets in the Chargers' 30-10 win over the Dolphins Sunday.

Kendricks is an afterthought in the Chargers' offense is best avoided in fantasy.

Patriots tight end Lance Kendricks has been suspended one game for violating the league's policy and program on substances of abuse.

This means neither Kendricks nor Ben Watson will see the field for New England in Week 1. Matt LaCosse is expected to serve as the Patriots' starting tight end versus the Steelers.

Lance Kendricks caught his only target for 11 yards in the Patriots' preseason win over the Panthers.

Kendricks is not likely to be a part of the final roster and can safely be avoided in fantasy drafts.

Lance Kendricks caught his only targets for 28 yards in the Patriots' preseason win over the Titans.

Kendricks has limited juice left, and is not expected to be a featured weapon this year, even if he makes the roster, which seems unlikely at this point.

Kendricks will compete for a roster spot and possibly playing time with Matt LaCosse, Stephen Anderson, Ryan Izzo, and Andrew Beck -- Ben Watson is serving a four-game suspension to open the year but is also in the mix to replace Rob Gronkowski. The once fantasy-dominant Patriots tight end position's value is at its lowest point it has been since 2010, Gronkowski's rookie year.