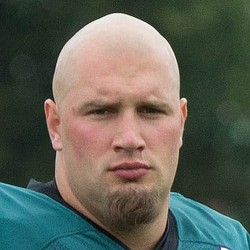 Philadelphia Eagles offensive tackle Lane Johnson has had his 10-game suspension for PED use upheld by the league, according to his lawyer.

This was the expectation all along, but now that it is official his suspension begins immediately. The Eagles are likely to start fifth-round rookie Halapoulivaati Vaitai at right tackle in Johnson's absence, which would be a downgrade to the outlooks of Carson Wentz and Ryan Mathews. The offensive line is solid enough that it can weather this loss, but this suspension certainly doesn't make it any easier for the team's offensive weapons.

Philadelphia Eagles right tackle Lane Johnson is facing a 10-game suspension for violating the league's substance-abuse policy, according to reports. He is appealing the suspension.

Johnson was suspended four games in 2014 for the same problem, and the next step is a full-season ban. Should the suspension stick, the Eagles would be in a world of trouble, as the tackle position is awfully thin. His suspension would impact the fantasy value of the team's skill players, especially Sam Bradford and Ryan Mathews.