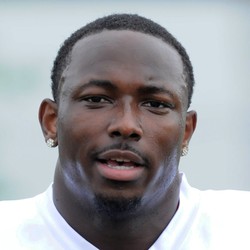 The Eagles are looking to add a veteran running back and interested in LeSean McCoy, Devonta Freeman and Carlos Hyde.

The Eagles are looking to sign a veteran RB to compliment featured back Miles Sanders. Freeman and Hyde are reportedly also drawing interest from the Jets and Seahawks. McCoy believes he could be a fit for the Eagles. He recently said on NFL Network's Good Morning Football; "I'm going to keep my options open, though. I could see myself there in Philly. Like I said, that's home, so you never know." The Eagles will weigh out their options, but look for the team to bring in a veteran RB soon. Whichever RB the Eagles decide to sign poses no immediate threat to Sanders' touches/starting job.

Brad Camara1 week ago
LeSean McCoy could see himself signing with the Eagles, but will he?

When asked about a possible return to Philadelphia on NFL Network’s Good Morning Football, free agent RB LeSean McCoy said, “I could see myself there in Philly, that’s home, so you never know.”

McCoy has mentioned wanting to play for a contender, and the Eagles seem to always be in contention. It seems like a possible match, as Philadelphia has been rumored to be interested in a veteran running back to complement Miles Sanders and Boston Scott. There were rumors that they were interested in former Texans RB Carlos Hyde, but nothing has come of that yet. At 31 years old, McCoy is certainly on the downswing of his illustrious career, but as a three-time Pro Bowl back with the Eagles, maybe they give him one last shot to try and contend. What better way to end your NFL career than with the team that took you in the second round of the 2009 Draft.

LeSean McCoy wants to sign with a contender. “I want to go to a team that’s a winning franchise,” said McCoy in an appearance on SiriusXM NFL Radio.

McCoy was a healthy scratch for the Super Bowl and played only one snap in the playoffs. He has something left in the tank, evidenced by his 4.6 yards per carry in 2019. McCoy logged 101 carries for 465 yards and four touchdowns across 13 games last season. The 31-year-old running back will look to latch onto a contender, but is more of a change-of-pace back at this point of his career.

LeSean McCoy is not expected to return to the Chiefs in 2020.

This isn't surprising, as McCoy's role diminished over the course of the season. There are rumors that he could land with a team like the Lions, and he'd likely continuing to fill a reduced role no matter where he lands given his age and recent production. As such, he's not likely to be fantasy-relevant in 2020.

LeSean McCoy (healthy scratch) is listed as inactive for the Super Bowl against the 49ers.

In an expected move, McCoy is inactive for the Super Bowl. The fringe hall-of-famer hasn't registered a carry since Week 15, and has since taken a backseat to Damien Williams.

Deposit $10 at a DFS partner site you have NOT played at and get a FREE 6 Month HOF Subscription!
Claim Offer
Who Should I Draft?
Most Accurate Experts
for LeSean McCoy
Consensus Rankings
View All Rankings
Do Not Sell
Are you looking to contact Customer Support about a subscription or account related question?
Yes
No, I'm a California resident looking for the California Consumer Privacy Act form