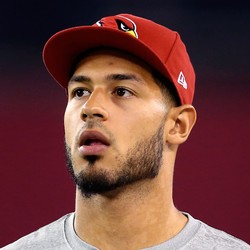 Logan Thomas corralled two of three targets for 17 yards in the Lions’ 27-17 loss to the Broncos on Sunday.

Thomas predictably fell off after last week's touchdown, doing very little with just a few targets. He's not on the fantasy radar even in the deepest of leagues.

Logan Thomas caught both of his targets for 24 yards and a TD in the Lions’ 19-16 loss to the Redskins on Sunday.

Thomas caught his first tuddie of the season and his first overall in two years, though he entered the day with just a 9/96 receiving line. This game was an outlier, and Thomas belongs on waivers.

Logan Thomas, who scored a 22-yard touchdown last week, caught one pass for seven yards Sunday against Oakland. It was his only target.

This normally wouldn't warrant a fantasy update, but what's amazing about it is that he did it less than a week after the death of his baby daughter one day after she was born. Coach Sean McDermott gave him the game ball afterward. If heart and inspiration were fantasy categories, Thomas would've been a game-winner this week. But as it is, he has no fantasy value in a Buffalo offense that continued to trend away from its tight ends.

Keith Kraska2 years ago
Logan Thomas back at Bills practice

This puts a slight damper on Nick O'Leary's sleeper appeal, but the real issue is how much the Bills will use their tight ends; only three of Tyrod Taylor's 32 targets last Sunday against Tampa Bay were to that position. Neither are recommended even against Oakland's weak defense against tight ends, but if you want one for a desperation start or DFS touchdown gamble, the choice is O'Leary, who has topped 50 yards in each of his past two games.

Bills tight end Logan Thomas was excused Wednesday for personal reasons. Coach Sean McDermott said he does not know when Thomas will return, and did not rule him out of Sunday's game against Oakland.

Thomas caught his first career touchdown last Sunday against Tampa Bay, his only target of the game. His lack of volume makes him undesirable for fantasy lineups, but his potential absence could mean a slight uptick in looks for Nick O'Leary -- meaningful only if the Bills get back to throwing to their tight ends, which they got away from against Tampa Bay. The Raiders are the 10th-easiest opponent against tight ends, according to FantasyPros' strength of schedule.