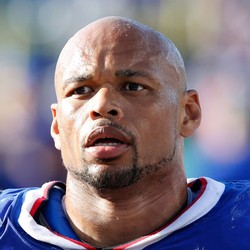 The Bills signed veteran linebacker Lorenzo Alexander to a one-year contract extension through the 2019 season Wednesday.

NFL Media’s Ian Rapoport reported the deal is worth a maximum value of $4.55 million with a base value of $3 million, including $550K to sign. The 35-year-old finished the 2018 season with 74 tackles, 6.5 sacks, two interceptions, two forced fumbles, and one fumble recovery in 16 games (eight starts).

Lorenzo Alexander had five solo tackles in limited play on Thursday against the Eagles.

Alexander had 12.5 sacks last year, and seems to be a perfect fit for the new defensive scheme in Buffalo. Alexander is a solid IDP play.

Buffalo Bills LB Lorenzo Alexander added another sack to his season total in a home win against the San Francisco 49ers Sunday, leaving him with the league lead in that category with two games remaining on the Week 6 schedule.

Alexander's sack total for the season (eight) is now just one fewer than his career total entering this season. Clearly, he has value in IDP leagues which award extra scoring for sacks, but his relatively low volume in overall tackling numbers make him less valuable in standard IDP scoring, where teammates Zach and Preston Brown (no relation) would be much more viable options.