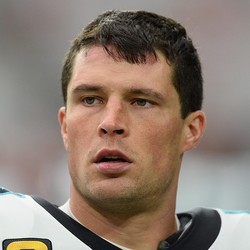 Luke Kuechly has announced his retirement from the NFL on Tuesday.

Kuechly, who was under contract for two more years with Carolina, has announced his retirement. This comes as a shock as Kuechly was playing at a high-level, and just recorded his eighth consecutive 100-plus tackle season. The All-Pro linebacker played all eight seasons in Carolina, totaling 1.092 tackles, 12.5 sacks, 18 interceptions and seven forced fumbles across 118 career games.

Kuechly has 131 total tackles through Week 15 of the NFL season. He also has two interceptions during that time as well. The eight-year veteran should be viewed as an LB1 each week and next season.

Kuechly leads all Panthers with 114 tackles through Week 14. The eight-year LB veteran should still be viewed as an LB1 in all leagues.

Kuechly has not had double digits in tackles in a game since Week 8 against the 49ers. He has a team-leading 90 total tackles and two interceptions through Week 11. Fantasy owners are not benching the seven-year veteran, but dynasty IDP owners might want to consider trading Kuechly this offseason.

Luke Kuechly ended Sunday’s game against the 49ers with 10 total tackles (nine solo) and one interception.

Kuechly remains a dominant force for Carolina even in this blowout of a loss. He has 72 total tackles after Week 8 and is an LB1 in all formats.

Deposit $10 at a DFS partner site you have NOT played at and get a FREE 6 Month HOF Subscription!
Claim Offer
Who Should I Start?
Most Accurate Experts
for Luke Kuechly
Consensus Rankings
View All Rankings