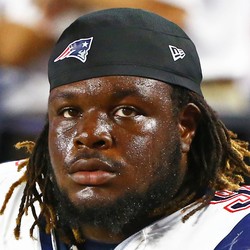 The former first-round pick by New England had a disappointing contract season with the Pats. Having just turned 25, Brown is certainly young enough to get back on track in New Orleans next year. He should slide in as the team's starting nose tackle.

Texas Tech's Jakeem Grant joins Rutgersâ€™ Leonte Carroo as the second receiver drafted by the Dolphins. The team obtained the sixth-rounder (No. 186) after trading sixth and seventh round picks with the Minnesota Vikings.

The Dolphins may look to see if Jakeem Grant can handle return duties. Third-round pick Kenyan Drake also has the potential to return kicks. Jarvis Landry was the main returner for the Dolphins last year, and provided a bonus in leagues where players were rewarded for return yards. Owners planning to draft him with that in mind, may want to temper those expectations going into camp and see what happens with the Grant and Drake picks.

First-round draft choice Malcom Brown sustained a left foot or ankle injury that required him to stay down on the sideline for several minutes with his shoe off. He soon put the shoe back on and remained on the field as a spectator for the rest of the practice. It did not appear that Brownâ€™s injury was too much of a cause for concern, however, as the medical staff did not treat him on the field, and the rookie defensive lineman actually spoke to reporters afterward. â€œJust working and competing,â€ he said with a smile several times in response to repeated questions.

It does not look like Malcom Brown suffered a serious injury on Friday but it is worth keeping an eye on updates. Brown is expected to help fill Vince Wilfork's shoes in the middle of the Patriots defense. If he can produce like he did in college, Brown could be a sleeper pick at IDP.

When the Patriots looked to replace Vince Wilfork, they looked at the draft, especially when the Texas defensive tackle fell to them at 32. When discussing Brown in his article, Oliver Thomas said that "versatility could help the first of 11 New England draft selections carve a place early on in [2015.] Brown lined up in both a 4-3 and 3-4 scheme at Texas, serving anywhere from a five-technique defensive end to a zero-technique nose tackle. Though as for where heâ€™ll best fit into the Patriotsâ€™ multiple front, one-technique and three-technique figure to be his most common residence based on the team's personnel in place."

Stopping the run was a tall task for the Patriots last season and defensive tackles are not typically high performers in IDP leagues, but Malcom Brown should boost the Patriots defensive line as they replaced the veteran Vince Wilfork with a much more flexible option at nose tackle. They will need to put more pressure on quarterbacks this season as their defensive backfield has been almost completely turned over.