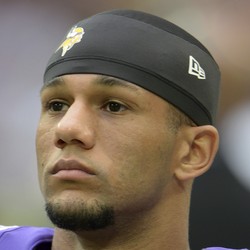 Marcus Sherels returned a punt in the second quarter for 79 yards against the Texans on Sunday.

This is Sherels' second returned punt for TD this season. The Vikings' D/ST are firing on all cylinders this season as one of the league's best. Hard to bank on as anything more than a what-the-heck bye week fill in, pay attention to lopsided matchups in the Vikings' favor, as Sherels doesn't see the field much beyond special teams and blowouts.