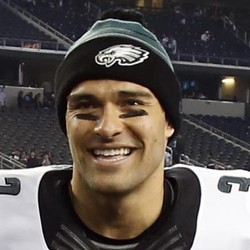 Mark Sanchez has retired from the NFL after eight seasons.

Sanchez announced his retirement, and he will join ABC as an analyst this season. He enjoyed a successful run from 2009-2012 as the Jets' starting QB, leading the team to two AFC Championship appearances, but he's appeared in just 17 games since leaving New York in 2012.

Washington quarterback Mark Sanchez completed six of his 14 passes for 38 yards and two interceptions before being benched in favor of Josh Johnson during Sunday's blowout loss to the New York Giants.

The offense looked much better (although still not very good) under Josh Johnson, and head coach Jay Gruden has already announced that Johnson will start over Sanchez next week. In parts of two games for Washington, Sanchez completed 19 of 35 passes for 138 yards and three interceptions.

Washington quarterback Mark Sanchez completed 13 of 21 passes for 100 yards and an interception after entering the game for Colt McCoy, who was lost for the season due to a fractured right fibula.

Sanchez was only signed by Washington two weeks ago, after starting quarterback Alex Smith was placed on injured reserve. He has limited knowledge of the offense and will likely be working with a scaled-down playbook for the rest of the season. He should be avoided in all but the deepest leagues that start two quarterbacks.

Journeyman and current Washington quarterback Mark Sanchez is being thrust into a starting role just two weeks after signing with the team, as Colt McCoy is reportedly done for the season with a fractured right fibula.

McCoy struggled in one quarter against the Eagles and Sanchez actually relieved him and played fairly well to start, but Sanchez has a long history of being a below-average quarterback in the NFL and was a free agent in November for a reason. He is not a viable option in fantasy except in deeper leagues where being a starter makes a quarterback relevant.

Rapoport reports that Sanchez has several points of familiarity with the team's staff, and he'll serve as the backup to Colt McCoy, who saw action Sunday following the gruesome injury to Alex Smith.

Blaine Blontz2 years ago
Most Accurate Experts
for Quarterbacks
Do Not Sell
Are you looking to contact Customer Support about a subscription or account related question?
Yes
No, I'm a California resident looking for the California Consumer Privacy Act form