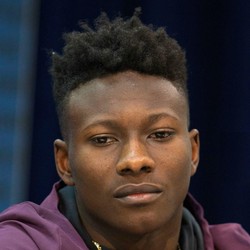 Brown had winter surgery to remove a screw from his foot. He has been running routes and catching passes from QB Lamar Jackson this offseason, showing no complications following surgery. “All of us to a man we’re saying, wow, once Hollywood has a real offseason, that’s going to be something,” Roman added. Brown has been rehabbing, but it unclear at this time if he will be fully recovered for the start of training camp. The 23-year-old is locked in as the Ravens’ WR1. He hauled in 46 receptions for 584 yards and seven touchdowns in 2019. Hollywood is currently 31st among all wideouts in the latest expert consensus rankings.

Marquise Brown had off-season surgery to remove a screw from his foot.

Brown had a screw placed in his foot in when he had Lisfranc surgery in January. He had a follow up procedure to remove the screw from his foot. Brown could be limited this offseason, but should be fine when training camp rolls around. Brown finished with 46 catches for 584 yards and seven touchdowns in his rookie season.

Brown suffered a foot injury at the end of his college career and it was still limiting him at times in his rookie season. The speedster flashed at times this season but ultimately left something to be desired in terms of his box score production. It wouldn't be surprising, health willing, to see him improve greatly in his sophomore campaign.

Baltimore Ravens wide receiver Marquise Brown caught 7-of-11 targets for 126 scoreless yards in a 28-12 loss to the Titans in the Divisional Round of the playoffs on Saturday.

Brown had a huge night in the loss. The rookie receiver was extremely volatile in his debut season but he flashed plenty of potential. The Brown/Lamar Jackson pairing should continue to grow into a dominant force over the next few years.

Baltimore Ravens wide receiver Marquise Brown caught two passes for 15 yards in a 28-10 win over the Steelers in Week 17.

Brown was originally not expected to play through illness but wound up being active. The rookie wideout finishes his debut season with 46 catches for 584 yards and seven touchdowns.

Matthew Terelle28 weeks ago
Who Should I Draft?
Most Accurate Experts
for Wide Receivers
Do Not Sell
Are you looking to contact Customer Support about a subscription or account related question?
Yes
No, I'm a California resident looking for the California Consumer Privacy Act form