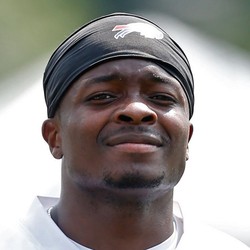 Goodwin finishes his 2019 season with just 12 catches in nine games. He looked like a breakout player just a couple of years ago but has struggled with injuries and consistency. It wouldn't be surprising if San Francisco moved on this off-season.

Marquise Goodwin will not play in the 49ers Week 14 contest.

If you were looking to rely on Goodwin this week, remove him from your lineup and look for other options on waivers.

It is mildly surprising that the team chose to deactivate Goodwin with Dante Pettis obviously in the coaches doghouse. With that being said, Pettis did come on strong during the stretch of last season, and it is more beneficial to give him reps in the hopes he can recapture some of his 2018 magic. Goodwin could end up a healthy scratch a few more times this season, so fantasy owners should take note. The 49ers active receivers are Emmanuel Sanders, Deebo Samuel, Kendrick Bourne, Dante Pettis, and Richie James.

Marqusie Goodwin was held without a catch in the 49ers' Week 10 loss to the Seahawks.

Goodwin has been off the fantasy radar all season. He can be left on the waiver wire right now.

49ers wide receiver Marquise Goodwin is a healthy scratch for the team's Week 9 matchup against the Arizona Cardinals on Thursday Night Football.

Goodwin does not appear to have much of a role with the 49ers after they acquired Emmanuel Sanders prior to the trade deadline.

Deposit $10 at a DFS partner site you have NOT played at and get a FREE 6 Month HOF Subscription!
Claim Offer
Who Should I Start?
Most Accurate Experts
for Marquise Goodwin
Consensus Rankings
View all Flex Rankings