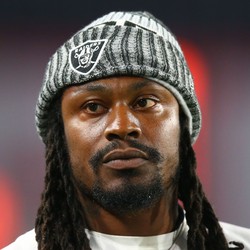 Marshawn Lynch rushed 12 times for 26 yards and two touchdowns in the Seahawks' 28-23 Divisional Round loss to the Packers.

He wasn't targeted in the passing game. Lynch finishes his three-game run with Seattle with a rushing line of 30-67-4. The touchdowns were nice from a fantasy perspective but he didn't show a lot of juice left in his legs. We expect him to stay retired this time.

Seahawks coach Pete Carroll says Marshawn Lynch is ready to handle a bigger workload now that he has two games under his belt.

Lynch has lacked explosiveness in his return to Seattle, rushing for just 41 yards on 18 attempts through two games. The 33-year-old might see some additional carries next weekend against Green Bay but expect Travis Homer to remain plenty involved, particularly in the passing game.

Marshawn Lynch ran six times for seven yards and a touchdown in the Seahawks' 17-9 Wild Card win over the Eagles.

He also caught two passes for 25 yards. In two games with the Seahawks this year Lynch has run for 41 yards on 18 carries. The veteran back appears to lack some of his trademark explosiveness following a 14-month absence from the NFL. The Seahawks will play the Packers in round two next Sunday.

This was his first game action in 14 months. There was a Sunday morning report that Lynch would see 10-15 carries and the wound up being true. The 33-year-old will likely be even more involved next Sunday against the Eagles in the Wild Card round.

Ian Rapoport of NFL Network reports Marshawn Lynch will receives 10-15 carries against the 49ers in Week 17.

Lynch reportedly impressed in practice this week and will be used in some key situations tonight. Robert Turbin and Travis Homer are expected to mix in as well, which makes this a situation to avoid for fantasy purposes.

Deposit $10 at a DFS partner site you have NOT played at and get a FREE 6 Month HOF Subscription!
Claim Offer
Who Should I Start?
Most Accurate Experts
for Marshawn Lynch
Consensus Rankings
View All Rankings