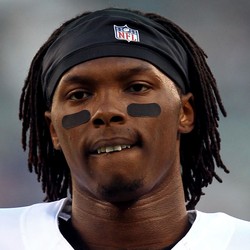 Martavis Bryant has been suspended indefinitely by the NFL for once again violating the league's substance abuse policy.

Bryant is currently on IR and will be a free agent after the end of the season, but it's very likely that he's done as an NFL player at this point. The move was always a concern this season, and it finally came to fruition. If he wasn't already, Bryant can be dropped in all formats.

Martavis Bryant has been placed on IR with his knee injury, ending his season.

It was certainly not the season Bryant or his owners hoped for entering the year. The Raiders traded a third-round pick for his services, but he was ultimately cut before being re-signed. The team has been a trainwreck overall, and Bryant will have an opportunity to leave via free agency this offseason. Given his track record, he's worth a stash in deep dynasty leagues to see if he can catch on with another team, even with another suspension looming.

Martavis Bryant has been ruled out for Week 12's contest against the Ravens due to a knee injury.

Bryant also missed Week 11, and he'll remain sidelined by the knee injury. He should have an opportunity to be a primary target once he's able to return due to process of elimination, but given the state of the offense that doesn't mean he'll be fantasy relevant.

Martavis Bryant has been ruled out Week 11 due to a knee injury.

The Raiders will also be without Jordy Nelson, opening up even more targets for Brandon LaFell, Jared Cook, and Jalen Richard.

Martavis Bryant left Sunday's game against the Chargers with a knee injury in the third quarter.

The severity of the injury is currently unknown but feared be serious by coach Jon Gruden.

Deposit $10 at a DFS partner site you have NOT played at and get a FREE 6 Month HOF Subscription!
Claim Offer
Most Accurate Experts
for Martavis Bryant
Consensus Rankings
View All Rankings