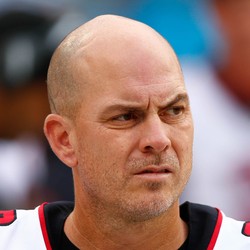 Matt Bryant has been released from the Atlanta Falcons.

Bryant was puled out of retirement to place-kick for Atlanta but it seems that Bryant will return to his retirement plans. League sources say that Younghoe Koo will be signed as Bryant's replacement.

Falcons K Matt Bryant was successful on 2-of-4 field-goal attempts in Sunday's Week 8 loss to the Seahawks.

While Bryant did not attempt an extra point and made two of his field goals, he also missed two, which wasn't the first time this season he's let his team down. At this point in his career also factoring in his age, there is a good chance Bryant and the Falcons will part ways following this lost season.

Falcons K Matt Bryant was successful on 1-of-2 field-goal attempts and on his lone extra-point attempt in Sunday's Week 7 loss to the Rams.

It was another let down for any fantasy owner starting Bryant, who is no longer the asset he once was in fantasy football. Bryant will look to bounce back in Week 8 against Seattle.

Falcons K Matt Bryant was successful on both of his field-goal attempts and on 3-of-4 extra-point attempts in Sunday's Week 6 loss to the Cardinals.

Bryant goes as the Atlanta offense goes and this week he lived up to his veteran expectations in fantasy. He has a good chance for another plus fantasy outing next week against the Rams.

Falcons K Matt Bryant was successful on his lone field goal attempt and on all three of his extra-point attempts in Sunday's Week 5 loss to the Texans.

While Bryant only totaled six points on the day, he will remain an upside fantasy kicker due to Atlanta's high-octane offense. Bryant will get the Cardinals in Week 6.

Deposit $10 at a DFS partner site you have NOT played at and get a FREE 6 Month HOF Subscription!
Claim Offer
Most Accurate Experts
for Matt Bryant
Consensus Rankings
View All Rankings