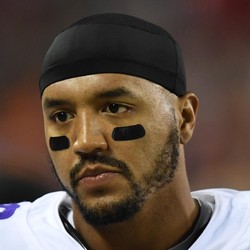 Baltimore Ravens wide receiver Michael Floyd caught three passes for 54 yards and a touchdown in his team's 26-15 preseason win over the Eagles on Thursday.

Floyd has been well-traveled since he left the Cardinals back in 2016. The veteran receiver is fighting for a roster spot as part of the Baltimore receiving corps. Even if he makes it, his days as a relevant fantasy producer are long gone.

Michael Floyd has signed with Washington.

Floyd was cut by the Saints prior to the start of the season. The former first-round pick has made the rounds of late, but he's been unable to latch on with a team. Despite his pedigree, he's unlikely to make much of a difference for real or fantasy purposes. It is interesting to see that Washington isn't happy with their current group of wide receivers, as they've also recently added former first-round pick Breshad Perriman.

While the Saints brought in Floyd this offseason, it appears that he was nothing more than a training camp body. Joining a crowded free agent WR class with players that include Dez Br4yant and Brandon LaFell, it could be a while before Floyd finds work in the NFL again, if ever.

Still just 28-years-old, Floyd is three years removed from having any real fantasy relevance and will have a difficult time even making the Saints roster behind Michael Thomas, Ted Ginn, Cameron Meredith, Brandon Coleman, and rookie Tre'Quan Smith.

Michael Floyd reeled in both of his targets for 20 yards in the victory over the Atlanta Falcons.

Floyd is most likely the WR3 in Minnesota. Unfortunately, that does not mean much in an offense that likes to run the ball.