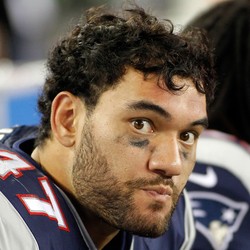 Michael Hoomanawanui had five catches for 31 yards and a touchdown on Sunday against the Colts.

The little used TE saw a decent amount of targets, turning one of them into a touchdown on Sunday. Don't read too much into it, as he remains down the depth chart.

The Saints have traded Akiem Hicks to the Patriots in exchange for Michael Hoomanawanui, according to the New Orleans Times-Picayune.

Michael Hoomanawanui played the first two games this season and did not record a catch. He was inactive for Week 3 as the Patriots were four deep in tight ends. Hoo-Man did not have a much of a role in the Patriots offense and may get a few more targets in New Orleans but still will not be fantasy relevant.

Michael Hoomanawanui isnâ€™t going to suddenly blossom into a tight end who can catch 40 balls a season. After all, he only has 40 receptions through his first five seasons, including 20 in three years with the Pats. But Hoomanawanui does have some good hands when called upon, and he has reminded his teammates of that in recent practices. The tight end caught eight passes from Brady in the last five practices after just a single reception in the teamâ€™s first four practices. Hoomanawanui also had five catches on Jimmy Garoppolo passes in the last three days.

Michael Hoomanawanui is currently third on the depth chart behind Rob Gronkowski and Scott Chandler at tight end. Both players have been known to get injured so unless the Patriots pick up another tight end, "Hooman" should see plenty of time on the field this year. As it currently stands he will not see enough targets to be fantasy relevant but if injuries occur he could be a pick up in deeper leagues.