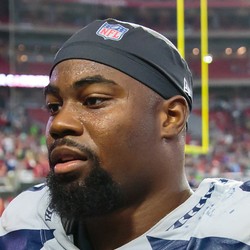 Recently-acquired Panthers running back Mike Davis is inactive for the team's Week 11 matchup against the Atlanta Falcons.

With Davis only being claimed this week, he likely needs at least another week in the Carolina system before the team is comfortable activating him as a backup to Christian McCaffrey.

This is a smart insurance based addition for the Carolina Panthers. McCaffrey is averaging 25.8 touches per game on the season, and needs a veteran depth piece behind him in case of injury. This claim may have also been prompted by the Green Bay Packers goal-line stand to secure the win over the Panthers in Week 10. At 221 lbs to McCaffrey's 205, Davis may have been a strong option had he been on the team versus the Packers.

Mike Davis rushed twice for three yards, adding a five-yard reception in the Bears’ 17-16 loss to the Chargers on Sunday.

Davis compiled eight yards on a mere three touches in Week 8, and even those numbers were surprising given the tag-team effort David Montgomery and Tarik Cohen have put together all year. Mike D. will be fantasy relevant only if an injury occurs to Montgomery or Cohen.

Mike Davis (personal) is inactive for the Bears' Week 4 matchup against the Vikings.

Davis had a very small role in the Bears' Week 3 win, and will miss Sunday's contest for personal reasons.

Mike Davis carried the ball one time for two yards in the Bears’ 31-15 win over the Redskins on Monday.

After leading the backfield in touches Week 1, Davis has combined for four carries for three yards in Weeks 2 and 3. David Montgomery is the clear lead back in Chicago, and Davis can be left on the waiver wire.

Deposit $10 at a DFS partner site you have NOT played at and get a FREE 6 Month HOF Subscription!
Claim Offer
Who Should I Draft?
Most Accurate Experts
for Mike Davis
Consensus Rankings
View All Rankings
Do Not Sell
Are you looking to contact Customer Support about a subscription or account related question?
Yes
No, I'm a California resident looking for the California Consumer Privacy Act form