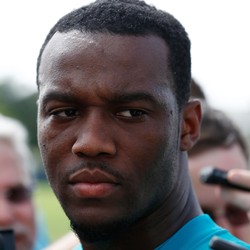 Saints RB Mike Gillislee rushed the ball three times for nine yards and a fumble in Week 1's loss to the Buccaneers.

While his fumbling woes following him from the Patriots to the Saints, the way he ran the ball on his limited opportunities was equally a let-down. Moreover, since the Saints activated Jonathan Williams, who was a preseason darling, Gillislee's days in fantasy relevance are numbers. Look for Williams to assume Gillislee's role next week versus the Browns.

With preseason darling Jonathan Williams surprisingly released, Gillislee could immediately fill the early-down role vacated during Mark Ingram's suspension. Boston Scott, a rookie, is really the only other competition. While Alvin Kamara and Ingram are healthy, Gillislee will present minimal fantasy value in season-long formats but is worth a look in DFS as a cheap weekly option.

The Patriots appear to have chosen Jeremy Hill as their short-yardage specialist as ESPN's Mike Reiss tweeted that the team has released Mike Gillislee.

Gillislee was a much-hyped sleeper last season and scored three touchdowns in New England's opener before fumbles landed him in Bill Belichick's doghouse. Gillislee will get another shot but no matter where he lands, the opportunity will undoubtedly be worse than the one he had with the Patriots. Gillislee's fantasy value is assuredly in rapid decline.

Mike Gillislee rushed for 35 yards and a touchdown on 10 carries in Friday's preseason game against the Panthers.

With both Sony Michel and Rex Burkhead out of action with injuries, Gillislee split work with Jeremy Hill. He wasn't overly impressive (nor was Hill, who left the game with an ankle injury), but he likely did enough to continue his role as a backup running back. Absent more significant injuries to Michel and Burkhead, Gillislee has little fantasy value this season.

Dan Harris2 years ago
Mike Gillislee bottled up vs. Eagles

Mike Gillislee led the Patriots with nine carries, but mustered only 22 yards (with a long of 13) against the Eagles. His other eight carries, thus, combined for only 9 yards.

Gilislee is most likely fighting for a roster spot, and it does not look like he's winning that battle. Jeremy Hill has performed better in both preseason games thus far, and has a more favorable contract situation (i.e., Gillislee is easier to cut). More likely than not, "Gilly" won't be on the 53-man roster.

Mark Leipold - Fantasy Banter2 years ago
Most Accurate Experts
for Mike Gillislee
Do Not Sell
Are you looking to contact Customer Support about a subscription or account related question?
Yes
No, I'm a California resident looking for the California Consumer Privacy Act form