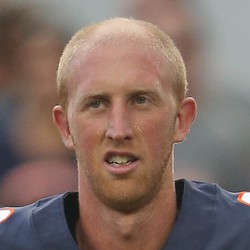 Ian Rapoport of NFL Network reports that Mike Glennon has made the Cardinals 53-man roster.

Glennon will serve as insurance to injury prone Sam Bradford and rookie Josh Rosen. He’s obviously not on the fantasy radar.

NFL Network's Ian Rapoport is reporting that the Arizona Cardinals have agreed to terms with quarterback Mike Glennon on a two-year deal worth $8 million.

We knew this was in the works once the Bears released him, but what does this do to the Cardinals prospects of drafting a quarterback in the first-round? With Sam Bradford guaranteed $15 million and the unnecessary signing of Glennon for two years when there likely wouldn't have been any competition, the Cardinals may wait another year to address the position. We find it hard to believe that Bradford is going to stay upright behind the Cardinals makeshift offensive line, so we may actually see Glennon throwing a football again in 2018.

Mike Glennon is expected to sign with the Cardinals on Wednesday, according to Tiffany Blackmon of NFL Network.

First Sam Bradford, now Glennon - the Cardinals are collecting mediocre quarterbacks at an astounding rate. Glennon played poorly last year with the Bears before being replaced by Mitchell Trubisky, with a 4:5 TD:INT ratio in four games. Given Bradford's contract, it seems likely that he'll start, and Glennon will simply be backup and not worthy of fantasy consideration in any league.

Dan Harris2 years ago
Mike Glennon to be released

If it wasn't for the language in the contract he signed last offseason, Glennon would be released immediately. Instead, the Bears will have to wait until the March 14 start of the new league year to officially make the move. Either way, its one and done for Glennon in Chicago, $18.5 million later for four starts and an 833-4-5 stat line. Upon his impending release, I'm expecting Glennon to return to Tama Bay to back up Jameis Winston.

The Chicago Bears have decided to bench Mike Glennon for Mitch Trubisky heading into Week 5.

It was only a matter of time for this news to come out, and many experts predicted the exact timing of this move. Glennon has turned the ball over seven times in four games, which has led to 45 points for the opposing teams. The combination of the turnovers and losing confidence in the locker room has led to his benching. Glennon will now get to collect his paycheck from the sidelines, while the Bears hope Trubisky develops into the quarterback of the future.