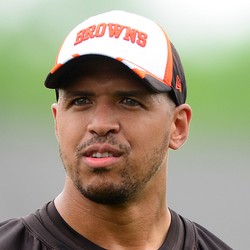 Miles Austin caught 4-of-6 targets for 52 yards in the Eagles' 27-16 loss to the Panthers on Sunday night.

With Nelson Agholor out and teammates Riley Cooper and Josh Huff limited due to injury, Austin paced the Eagles' receivers in catches and yards, trailing only tight end Zach Ertz in both categories. The Eagles had eight drops in Sunday's loss, although Austin continues to show sure hands and savvy route-running. He has posted 112 receiving yards with seven catches on nine targets over the last two games. Philadelphia has a bye in Week 8.

Miles Austin hauled in all three of his targets, averaging a healthy 20 yards per grab in the Eagles' 27-7 win over the Giants on Monday night.

With Nelson Agholor sitting due to a hamstring injury and fellow wideouts Riley Cooper and Josh Huff also sitting out a handful of plays with injuries, Austin was on the field for 52-of-82 snaps. While his sure hands and route-running savvy certainly helped the Eagles sustain drives, Austin will remain fifth on the team's WR depth chart next week at Carolina.

Miles Austin caught 2-of-3 targets for 51 yards and a touchdown in the Eagles' 23-20 loss to Washington on Sunday.

Austin, mostly quiet through Philadelphia's first three games, sparked the offense with a 39-yard TD grab from Sam Bradford to give the Eagles a 20-16 lead early in the fourth quarter. While it was nice to see the veteran make a critical play, Austin won't see enough usage to warrant ownership in any format, and that goes for daily leaguers seeking value next week against New Orleans.

Second year receiver Jordan Matthews singled Miles Austin out for praise, calling him a "baller". He went on to say that Austin is "like having another coach in that meeting room...he's one of those guys I can lean on".

While Austin will no doubt be pleased to hear about his positive role as a mentor, he's still trying to earn his corn as a player. The equal opportunity nature of the Eagles offense means the ball gets spread around, but truthfully Austin faces an uphill task to even make the team. If he has fully recovered from the horrific kidney injury he suffered in 2014, he could serve as a veteran presence somewhere, but his fantasy ceiling is very low.

NFL Media Insider Ian Rapoport reported on Monday that Miles Austin has agreed to a one year deal worth $2.3 million to sign with the Philadelphia Eagles.

Austin is a 30 year old WR on a team that is now hungry for WR depth. Look for Austin to compete as a WR4 or WR5 type in this offense behind the likes of Jordan Matthews, Josh Huff and Riley Cooper. Austin is coming off a 47 reception, 568 yards and 2 touchdown 2014 season in 12 games with the Cleveland Browns.