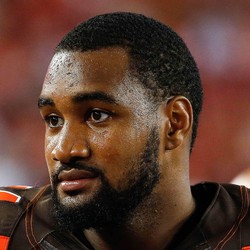 Rookie Nate Orchard had one of the best games of his young career against the Chiefs. He made two solo tackles and added one sack and one interception.

The interception was the first of his career and came off of notoriously cautious Alex Smith, who has thrown just five all season. Orchard is up to 33 combined tackles and three sacks on the season. He's worth a look in deep IDP leagues.

Nate Orchard picked up two sacks on Sunday against the San Francisco 49ers. They were the first two sacks of the rookie's career.

Orchard, a second-round draft choice in the 2015 draft, is up to 30 combined tackles and two sacks on the year. He should continue to see ample playing time going forward and is worth keeping on your radar in deep IDP leagues.

The Cleveland Browns have selected DE Nate Orchard from Utah with the 51st overall pick in the 2015 NFL Draft.

Nate Orchard is a DE with a potentially high ceiling. He lacks the lead dog mentality that is usually associated with strong defensive ends in this league, but with his explosive inside move and quick feet he is definitely coachable. The browns have taken two defensive pieces in the first two rounds of the draft and are making and argument for a fantasy relevant DST.

Nate Orchard won the Hendricks Award for Best Defensive Lineman and had 18.5 sacks and 21.5 tackles for a loss for Utah this season.

Orchard was a standout for the Utes this year, posting a 4 sack game against UCLA and a 3.5 sack game against Stanford, and the 6-3 251 pound end may play end in a 4-3 scheme or outside linebacker in a 3-4 scheme. Orchard is seen as a second day draft pick, but he could really outplay his third or fourth round projection with his 4.75 speed and good technique. He intercepted Bryce Petty at Senior Bowl practice and has been active throughout his time in Mobile.