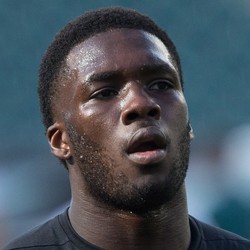 Recently-signed Raiders wide receiver Nelson Agholor is expected to play on the outside (and not in the slot), based on what NFL insider Adam Caplan is hearing from his sources.

The Raiders have Tyrell Williams occupying one starting position and Hunter Renfrow in the slot, so Agholor is expected to compete with Zay Jones for the other starting spot on the outside, depending on what the Raiders do in the NFL Draft. Agholor had most of his success while playing in the slot for the Eagles and was inconsistent when playing on the outside, but Jon Gruden and Mike Mayock are hoping for a reclamation project after bringing him in on a team-friendly deal.

Mike MaherApr 7, 2020
Nelson Agholor is signing a one-year deal with the Raiders

A former 2015 first-round pick, Agholor has played five seasons in Philadelphia, never recording more than 768 yards in a season. The Raiders are desperate for WR help to work alongside Tyrell Williams and Hunter Renfrow, so look for Agholor to get some decent playing time in Las Vegas. As it stands now, he’s not on the radar even as a WR4 in 2020 fantasy leagues.

Jeff McLane of The Philadelphia Inquirer writes that free agent Nelson Agholor is "unlikely to return".

Agholor had a rough season dealing with drops and injuries. He wound up catching just 39 passes for 363 yards. He's still just 26 years old, however, and not a bad reclamation project for a team in need of receiver depth.

It seems unlikely that Agholor plays again this season. In 11 games this year he caught 39 passes for 393 and three touchdowns.

Nelson Agholor (knee) is officially listed as inactive for the Eagles' Week 17 matchup against the Giants.

Deposit $10 at a DFS partner site you have NOT played at and get a FREE 6 Month HOF Subscription!
Claim Offer
Most Accurate Experts
for Nelson Agholor
Consensus Rankings
View All Rankings