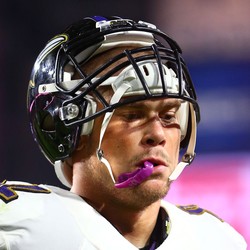 Baltimore Ravens tight end Nick Boyle was shut out on two targets in a 28-12 loss to the Titans in the Divisional Round of the playoffs.

Boyle appeared to injure his right leg during the game. The veteran is one of the better blocking tight ends in the league but he doesn't usually make an impact in the passing attack.

Baltimore Ravens tight end Nick Boyle caught a six-yard pass in a 28-10 win over the Steelers in Week 17.

Boyle drew just two targets in the win. He finishes the season with 31 catches for 321 yards and two scores.

Boyle has put up a few decent games this season but he's mostly just out there as a blocker. The veteran tight end will finish up the regular season against the Steelers next week.

Baltimore Ravens tight end Nick Boyle caught 2-of-3 targets for 10 yards and a touchdown in a 24-17 win over the Bills in Week 14.

Boyle hauled in his second touchdown of the season. The veteran tight end has just 27 receptions in 13 games with the Ravens. He will not be a strong fantasy option in Week 15 against the Jets.

Baltimore Ravens tight end Nick Boyle caught a four-yard pass in a 20-17 win over the 49ers in Week 13.

Boyle was questionable heading into the game but was able to suit up. The veteran tight end has formed part of a three-man rotation at the tight end position this season. He will face the Bills in Week 14.