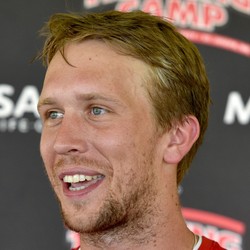 Bears coach Matt Nagy says both Nick Foles and Mitch Trubisky will play with the starters during the preseason.

Foles is widely expected to spend the 2020 season as Chicago's quarterback but the team is insistent that this is an "open competition" between the two. It also remains to be seen whether or not we will even have all four preseason games this year. Chicago might actually be better off giving Foles all the reps in a shortened off-season. Foles being named the starter would be good news for Allen Robinson.

Bears' new quarterback Nick Foles has restructured his contract to be 3-year/$24M with $21M fully guaranteed and $6M in additional annual incentives, per Spotrac.

Foles will still receive all of the money that he was guaranteed under his contract with Jacksonville, but being spread out over a few years with added incentives makes the contract a bit more team-friendly. While the Bears' staff has said that it's an open competition at quarterback, our experts have Foles ranked above Mitch Trubisky and he is expected to win the job in camp. While Foles could potentially elevate the play of his teammates, Allen Robinson may take a slight hit in fantasy value if Foles is declared the starter. Robinson was third in targets last season with a whopping 9.6 per game, but a lot of those were forced throws in tight windows that Foles may avoid.

Trade now official: Former Jaguars QB Nick Foles is headed to Chicago in exchange for the 140th pick in the 2020 NFL Draft.

Foles will compete with incumbent QB Mitch Trubisky for the starting job in Chicago. Foles is also reunited with Head Coach Matt Nagy, with whom he played under in Kansas City in 2016 when Nagy was the offensive coordinator there. It’ll be interesting to see if Foles can wrestle the starting job away from Trubisky, but in either case, the QB competition is mutually beneficial to both players, and should increase the level of play at the position in Chicago.

QB Nick Foles is being traded to the Chicago Bears in exchange for the Bears’ compensatory fourth-round pick, No. 140 overall. Foles has already restructured his contract with Chicago. He still has three years, $21M guaranteed left, but Foles has the ability to void the deal after each of the first two seasons based on his performance.

Foles has worked with Coach Matt Nagy in the past, and now he’ll get the opportunity to compete with current Bears QB Mitch Trubisky for the starting job in Chicago. Jacksonville is left with Gardner Minshew II at the quarterback position, but they also have the 9th selection in this year’s draft, so they may decide to select a QB at that slot. Hold the phone on Minshew Mania for now until we see what happens at the draft April 23.

Michael Lombardi is reporting that the Bears are trying to get involved in trading for Nick Foles.

Just eight pass attempts into his first season with the Jaguars after signing a 4-year/$88M contract, Foles went down with an injury and Minshew-mania took over Jacksonville. Foles made a brief return in week 10 but was eventually benched for Minshew after three straight losses. The Bears have been linked to rumors for both Foles and Teddy Bridgewater, as it appears that they are finally ready to move on from former second-overall pick Mitch Trubisky. Whatever quarterback lands in Chicago will take the reins over an offense loaded with skill players.

Deposit $10 at a DFS partner site you have NOT played at and get a FREE 6 Month HOF Subscription!
Claim Offer
Who Should I Draft?
Most Accurate Experts
for Nick Foles
Consensus Rankings
View All Rankings
Do Not Sell
Are you looking to contact Customer Support about a subscription or account related question?
Yes
No, I'm a California resident looking for the California Consumer Privacy Act form