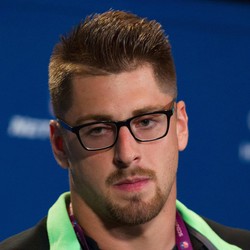 Nick Vannett signed a two-year contract with the Broncos on Saturday.

Vannett signs a two-year deal with Denver and will most likely backup starter Noah Fant. He totaled 17 catches for 166 yards across 16 games for both the Steelers and Seahawks in 2019. Vannett is mainly a target in deep-league formats.

Pittsburgh Steelers tight end Nick Vannett caught his lone target for an 18-yard gain in a 16-10 loss to the Jets in Week 16.

Vannett was barely used with Vance McDonald returning to action after missing the previous game with a concussion. Vannett will finish the regular season against Baltimore next week.

Pittsburgh Steelers tight end Nick Vannett caught 5-of-6 targets for 40 yards in a 17-10 loss to the Bills in Week 15.

Vannett saw some extra work with Vance McDonald out with a concussion. His 40 receiving yards go in the books as a season-high. Vannett will be a low-end TE3 in Week 16 against the Jets.

Pittsburgh Steelers tight end Nick Vannett caught his lone target for a seven-yard gain in a 20-13 win over the Browns in Week 13.

Vannett is the second-string tight end on a run-first Steelers offense, meaning his fantasy upside is practically zero. He won't be on the radar, even in a prime Week 14 matchup against the Cardinals.

Pittsburgh Steelers tight end Nick Vannett caught a seven-yard pass in a 21-7 loss to the Browns in Week 11.

Vannett continues to play sparingly for the Steelers. He will take on the Bengals in Week 12.

Matthew Terelle34 weeks ago
Who Should I Draft?
Most Accurate Experts
for Tight Ends
Do Not Sell
Are you looking to contact Customer Support about a subscription or account related question?
Yes
No, I'm a California resident looking for the California Consumer Privacy Act form