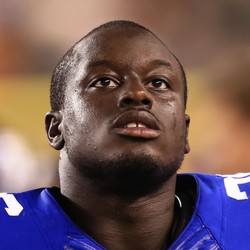 Orleans Darkwa ended the year on a high note in the Giants' 18-10 victory over Washington. The Tulane product ran the ball 20 times for 154 yards and a touchdown.

A great deal of Darkwa's fantasy points came on a huge 75-yard TD run on the second play from scrimmage, which saw the starting back find a crease, break through arm tackles and outpace the Washington defense on the way to the end zone. Darkwa finishes a breakout 2017 with five touchdowns and over 700 yards. A free agent this offseason and probably the most consistent back on the Giants' roster, Darkwa is capable of being a starter wherever he winds up. But injury concerns over the past few seasons could hold him back. He should be a mid-round selection in 2018 fantasy drafts.

Orleans Darkwa was the Giants' number two back in their 23-0 loss against the Arizona Cardinals. Darkwa totaled 10 yards on six rushing attempts.

Darkwa was not the only Giants' runningback to find little to no room to run during the course of the embarassing shutout. However, that he was passed over in favor of the rookie Wayne Gallman is telling. The Giants' could let Darkwa walk during 2018 free agency.

Orleans Darkwa led the Giants in rushing attempts and had a goal-line TD carry but did little else in New York's 34-29 loss. Darkwa's nine carries yielded a paltry seven yards. The Tulane product also had one reception for nine yards.

Darkwa struggled to find rushing lanes against a very stingy Eagles' defensive line and didn't seem 100% healthy either. He received nine carries to Wayne Gallman's eight but the rookie also had five more receptions than Darkwa. His touchdown saved what would've been an otherwise dreadful performance.

Orleans Darkwa, who was questionable with an illness coming into the game, played against Dallas on Sunday but with limited reps. Darkwa was third on the RB pecking order with 19 snaps. The Tulane product carried the ball 10 times for only 29 yards and caught two passes for 15 yards.

Darkwa had one of his worst performances since he grabbed the starting job, not ideal at this point in the fantasy season. The Dallas defense held him in check most of the afternoon and its unknown if anything besides an illness kept him to just 19 snaps. If Darkwa is healthy he is the unquestioned the starter but on a struggling Giants' offense, he is a risky start.

Dealing with an illness, Darkwa is fully on track to play Sunday against Dallas. However, since the Cowboys have Sean Lee returning, their run defense could be intact in a must-win spot. Darkwa is a risky Flex option for Week 14.

Anthony Cervino - Anthony Cervino3 years ago
Most Accurate Experts
for Running Backs
Do Not Sell
Are you looking to contact Customer Support about a subscription or account related question?
Yes
No, I'm a California resident looking for the California Consumer Privacy Act form