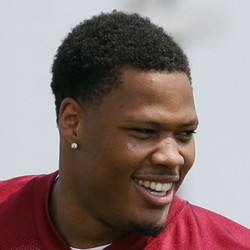 Preston Smith racked up six total tackles and two sacks during Sunday’s win over the Panthers.

Smith has 10 sacks, 41 tackles, one forced fumble, and an interception through Week 10. He should be started every week across all leagues, but owners should make plans to be without all Packers as they are on Bye in Week 11. Nick Kwiatkoski of the Bears might be the best player to grab as he would be widely available.

Preston Smith racked up seven total tackles (five solo) and one sack during Sunday’s 26-11 loss to the Chargers.

Smith is just 0.5 sacks behind teammate Za’Darius Smith for team leader in that category. Preston Smith also has 35 total tackles, one interception and a forced fumble to his name. Both should be rostered in deeper IDP leagues.

Smith is the team lead in sacks with seven through Week 6. He is worth rostering in most IDP leagues, especially in deeper formats.

Matt Verderame of Fan Sided reported Wednesday that the Redskins are “highly unlikely” to use the franchise tag on linebacker Preston Smith.

Smith, 26, is set to become an unrestricted free agent March 13th. He is expected to draw significant interest from other teams. Smith has spent his entire four year career with the Redskins, playing in all 64 games with 50 starts in that time. He had 53 total tackles, four sacks, one interception, and a fumble recovery returned for a touchdown in 2018.

Redskins head coach Jay Gruden told reporters on Friday morning that he wants to see outside linebacker Preston Smith become a “dominant edge setter,” and that “it’s a big year for him.”

Gruden said Smith has “proved he can be an excellent pass rusher.” He described Smith as “long, tough and strong.” Smith is entering his fourth NFL season after being selected 38th overall in the 2015 draft. He has 20.5 sacks (8, 4.5, 8) in his first three years, but the hope is he will reach double-digits for the first time in 2018. Gruden finished by saying “we expect great things.”