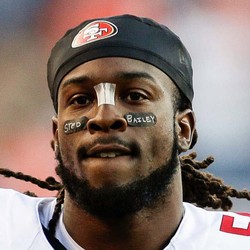 Minimal, unless one of starters Alec Ogletree and BJ Goodson were to go down with injury. Armstrong would have come in off the bench, but now it would likely be Tae Davis.

Ray-Ray Armstrong got the start in place of the injured Reuben Foster (ankle) and finished yesterday's loss against Seattle with eight tackles including four solo.

Armstrong will be a starter for as long as Foster is out, which could be over a month. As long as he is a starter Armstrong will have value in this surprising defense. The offense has struggled which has led to the defense playing more snaps than they should. In real football that is bad, but for fantasy it is good because it leads to more opportunity and points. Armstrong shouldn't be considered a weekly starter, but if he is still filling in for Foster once bye weeks hit he will be a sneaky flier with double-digit tackle upside.

Ray-Ray Armstrong tallied a sack Sunday against the Cleveland Browns.

The former safety turned linebacker is undersized as the Raiders strong side linebacker. After losing outside containment in the first two games, Armstrong did a much better job setting the edge against the Browns. He should not be considered for fantasy.

Armstrong has been terrible as the Raiders SLB. He doesn't set the edge and misses tackles when given the opportunity. It wouldn't surprise me if he's replaced at some time this season.

Stan Son4 years ago
Ray-Ray Armstrong struggles against the Bengals

Ray-Ray Armstrong tallied two tackles with one assist against the Bengals.

Armstrong really struggled as he lost outside containment multiple times. I don't think he will be a viable fantasy option.