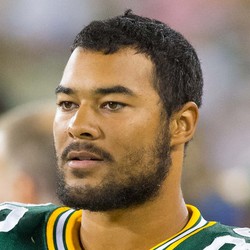 The Eagles placed tight end Richard Rodgers on injured reserve on Tuesday, the team announced. He was replaced on the roster by wide receiver Markus Wheaton.

Rodgers will be eligible to return midway through the season, but he won't be relevant to fantasy owners unless something happens to Zach Ertz or rookie tight end Dallas Goedert.

Rodgers played 15 games for the Packers last season but wasn't effective, catching just 12 balls for 160 yards and one touchdown. With Trey Burton joining the Bears, Rodgers will have the opportunity to play in '12' sets and act as an occasional red-zone target, but he offers little upside and is best left on the fantasy waiver wire.

Richard Rodgers caught four passes on four targets for 77 yards and a touchdown as Green Bay lost to Carolina in Week 15 action on Sunday.

This was Rodger's most productive game of the year as the tight end welcomed back QB Aaron Rodgers. Rodgers has not be utilized this year and cannot be trusted in standard fantasy leagues but could be used in deeper leagues for his touchdown potential.

Richard Rodgers caught one pass on three targets for 25 yards as the Packers lost to the Steelers in Week 12.

This was the most targets Rodgers has seen since Week 2. The veteran tight end is not a big part of the Packers offense and is not worth owning in fantasy.

Richard Rodgers caught one pass on one target for eight yards as the Packers defeated the Bears in Week 10.

It was thought that Rodgers could finally see an increased role in the Packers offense with the release of fellow tight end Martellus Bennett. That was not the case as the Packers continue to avoid the tight end position in the passing game. Rodgers is not worth owning in fantasy.