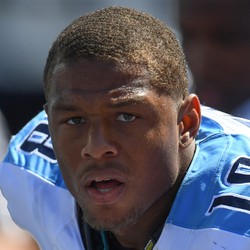 Saints WR Rishard Matthews caught his only target for seven yards in Friday night's loss to the Vikings.

Matthews only appeared in five games last season and is trying to right the ship. If he makes the Saints' roster, he'd add a veteran presence to a young wide receiver corps.

Matthews worked out for the Jets last week before saying he probably won’t sign this year. That has changed of course, and Matthews likely takes the spot of recently released Terrelle Pryor. Matthews isn’t on the fantasy radar right now after taking nearly half the year off.

Rishard Matthews told reporters that he's unlikely to sign with a team this season.

Matthews recently worked out for the Jets, but this report would seem to indicate that he's likely to wait until the offseason to sign with a new team. Matthews was fantasy relevant last season, but it appears he'll remain sidelined for the 2018 campaign.

Blaine Blontz2 years ago
Rishard Matthews working out for Jets

Rishard Matthews worked out for the Jets on Tuesday, according to Adam Schefter.

One of the Jets' top WRs, Quincy Enunwa, is dealing with a potential multi-week injury, and they haven't had consistent production from the position this season. Matthews was fantasy relevant as recent as a season ago, though he would join a rather crowded group of receivers including Terrelle Pryor, Jermaine Kearse, and Robby Anderson.

According to NFL Network's Ian Rapoport, wide receiver Rishard Matthews asked for the Tennessee Titans to release him due to lack of targets. On his own personal Instagram post, Matthews wrote "When Daddy's home for good. That is unless someone calls him to get off the couch," implying that the Titans had granted his wish and released the seventh-year pro. In three games, Matthews played exactly half of the Titans snaps but registered only three catches for 11 yards.

If Matthews is indeed on the open market, he should quickly attract attention from one of several wide receiver-needy teams. Matthews averaged 54 catches for 801 yards and 5.7 touchdowns annually over the past three seasons. He can still be a quality NFL receiver and be fantasy-relevant if he winds up in a solid landing spot.

Jody Smith - FantasyPros1 year ago
Most Accurate Experts
for Wide Receivers
Do Not Sell
Are you looking to contact Customer Support about a subscription or account related question?
Yes
No, I'm a California resident looking for the California Consumer Privacy Act form