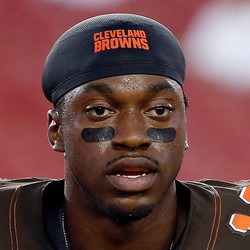 Baltimore Ravens quarterback Robert Griffin completed 11-of-21 passes for 96 yards and an interception in a 28-10 win over the Steelers in Week 17.

Griffin also added eight rushes for 50 yards in the win. He got the start with the Ravens resting several key starters, including Lamar Jackson. Look for RGIII to return to the bench when the Ravens kick off the playoffs in the Divisional Round.

Baltimore Ravens quarterback Robert Griffin (thumb) is expected to be ready to serve as the team's backup QB in Week 1 against the Dolphins.

Griffin missed most of the preseason with a thumb injury but he appears to be ready to serve as Lamar Jackson's backup in Week 1.

Matthew Terelle21 weeks ago
Robert Griffin on track for Week 1

Ravens beat writer Jamison Hensley is reporting QB Robert Griffin (tumb) is "on schedule" to be ready for Week 1.

Griffin injured his thumb early in training camp but is already throwing passes and on track for the season opener. Griffin will be Lamar Jackson's primary backup in 2019.

Ravens backup quarterback Robert Griffin was seen throwing passes at practice this weekend, according to The Athletic's Jeff Zriebiec on Twitter.

Griffin suffered a hairline fracture in his right thumb just a week ago, so it is a positive sign that he is already back out on the field throwing passes. Lamar Jackson is the clear starting quarterback in Baltimore, but Griffin is an intriguing handicap in that the Ravens have made it clear that they are catering the offense to Jackson and his mobility and have prioritized having a backup in place who possesses similar skills. If Jackson were to be injured this season, Griffin would immediately become a popular waiver wire and streaming candidate, as long as he is healthy.

Griffin was reportedly a great influence on Lamar Jackson last year, and he’ll continue to serve as a mentor for him in 2019.